We’ve had two days of 70 degree weather and tonight I fired up the grill! On the menu, London broil with grilled asparagus.

I use the term London broil loosely here, as it doesn’t necessarily refer to a dish from London, or to a cut of beef but to a cooking method. Generally, marinating then broiling or cooking the meat at high temperature.

Beef in American grocery stores labeled London broil is usually a top round roast or steak one to two inches thick, weighing one to two pounds. This is a lean cut of beef taken from the round, or back part of the back leg of the cow. One 3 ounce serving contains just 170 calories, 4 grams of fat (with only 1 gram of saturated fat), yet packs a whopping 31 grams of protein!

The recipe is very easy.

Salt and pepper the London broil, then place it in a shallow bowl with two tablespoons each of: balsamic vinegar, olive oil and either maple syrup or another natural liquid sweetener. Add one tablespoon of minced garlic. Let marinate at least 2 hours, turning once. I like to do this the night before grilling and leave it to marinate in the fridge.

Remove beef from the fridge and preheat your grill. I have a natural gas grill and put the meat on when it hits 425 degrees Fahrenheit.

Grill for 12 to 15 minutes, or until a meat thermometer registers 135 degrees Fahrenheit for medium to medium rare doneness. Turn once halfway through grilling.

Let rest for at least 15 minutes before slicing against the grain to desired thickness.

For the asparagus, rinse and dry, then trim just the woody bottoms. Place in a shallow dish with 1/2 teaspoon each of salt and pepper, and one tablespoon each of balsamic vinegar and olive oil. Place them on the grill while it is preheating and grill for just 5 minutes.

I served the London broil and asparagus with some baked sweet potatoes and did a quick saute of shallot and mushrooms, you can find that recipe here: Tipsy Mushrooms. 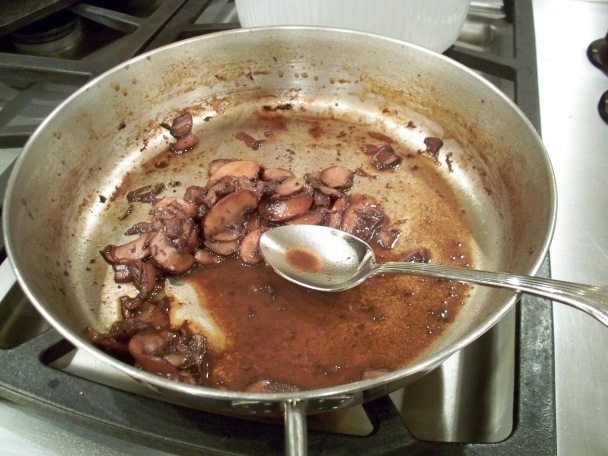 Just scroll down the linked post for the how-to. Don’t have a deep red wine on hand for the mushrooms? Substitute whatever wine you have, or a cup of broth instead.

This simple balsamic marinade also works wonderfully on poultry legs or thighs, flank or flap steak, or mixed into ground meat for burgers.