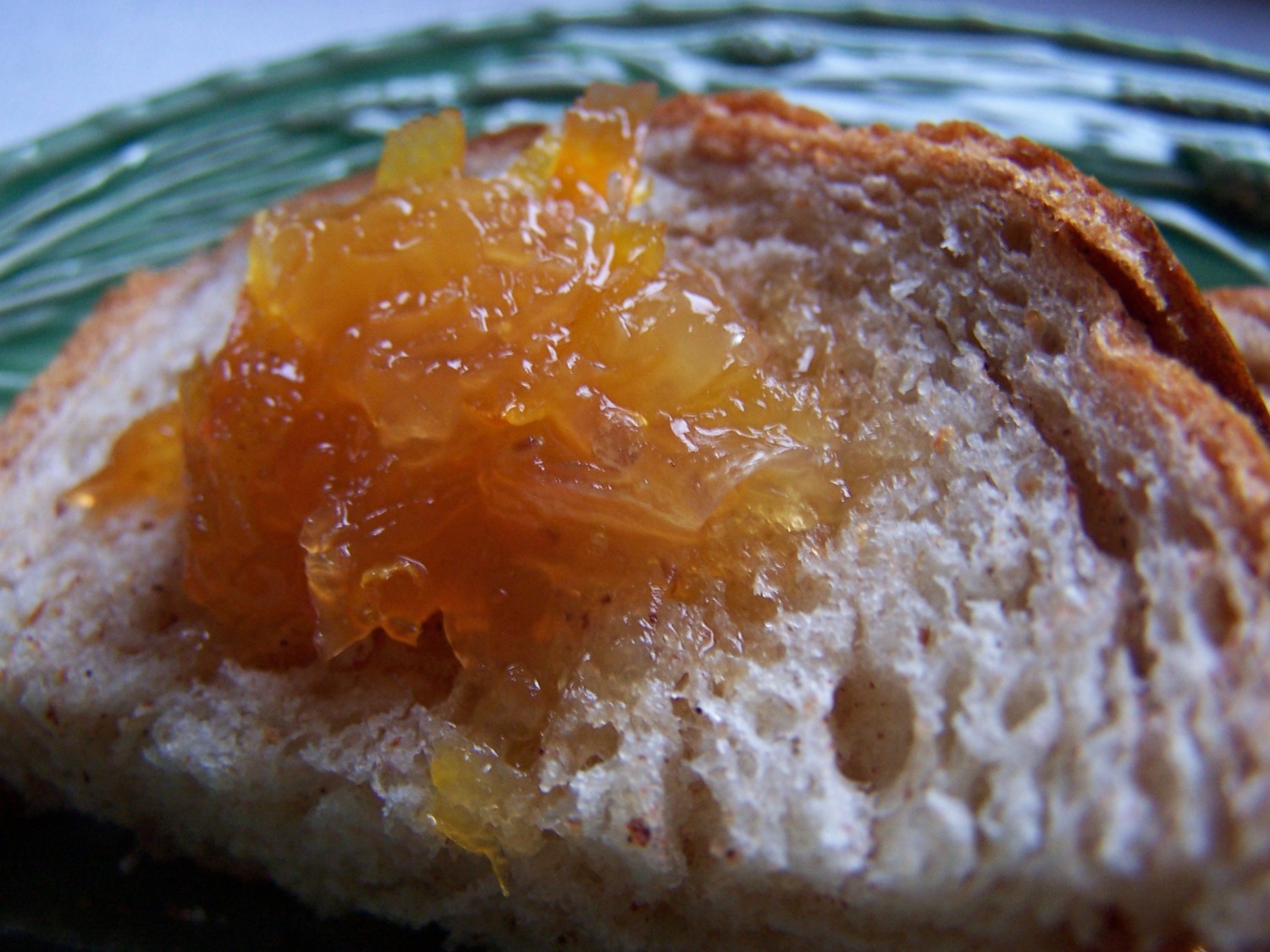 Certainly you’ve heard the phrase pride of lions or gaggle of geese, or at the very least school of fish. All phrases meant to convey a group of something. A gathering. In this case, a band of marmalade.

Last week my sister texted me, “Hey! I have some band fruit that needs to be made into marmalade…”

She brought the fruit and all the supplies and together we made fresh citrus sunshine in a jar!

The band fruit is a many year tradition from our high school Alma Mater, a fundraiser for the RHS Band. Our family’s history with the school and the band goes back to 1979, so band fruit has been a part of our Christmas season for a long time.

My sisters and I in our RHS Marching Band uniforms, circa 1979

This band of marmalade represents many gatherings. From friends made in school, to seemingly endless practices, band camps and performances, concerts, half time at football games, marching competitions, parades, and graduations.

It represents the hard work put in by staff, students and volunteers as well as funds raised so students can continue to grow as they gather.

Lastly, it represents Christmas memories, as my family will gather this week to celebrate and make more memories. Including bright, citrusy marmalade memories.

4 medium oranges (or 5 smaller ones)

Scrub fruit with a vegetable brush or washcloth under warm running water.

Using a zester or vegetable peeler, peel zest from the fruit, trying to avoid too much pith (white bitter stuff just under the peel). 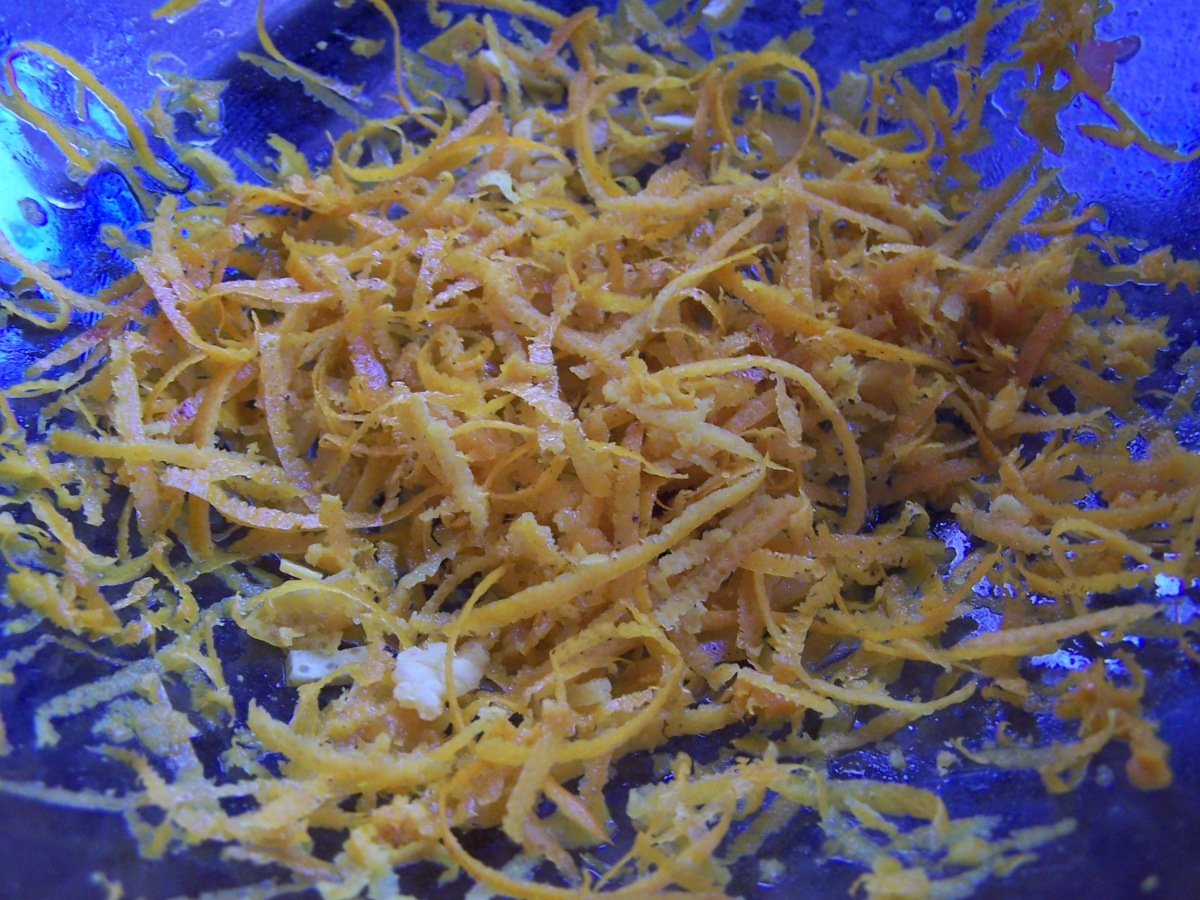 For strips of peel cut with a peeler, stack up the pieces and cut small ¼ inch pieces from the short end.

Set cut peel into a large bowl. Cut your fruit into small pieces over the bowl to catch any juices. To cut the fruit, pull the rest of the peel off and any extra white pith still remaining.

Cut fruit in quarters lengthwise and trim the center pithy membrane. Cut the quarters into small pieces and place into bowl. Trim any tough membrane pieces you think might not break down.

Some recipes call for sectioning the citrus fruit, to remove all membrane. These recipes also call for nearly double the sugar, or the addition of commercial pectin. The membrane does contain natural pectin which helps the marmalade gel. I prefer to keep it in, unless it feels too tough. In that case, I just trim the tougher pieces. 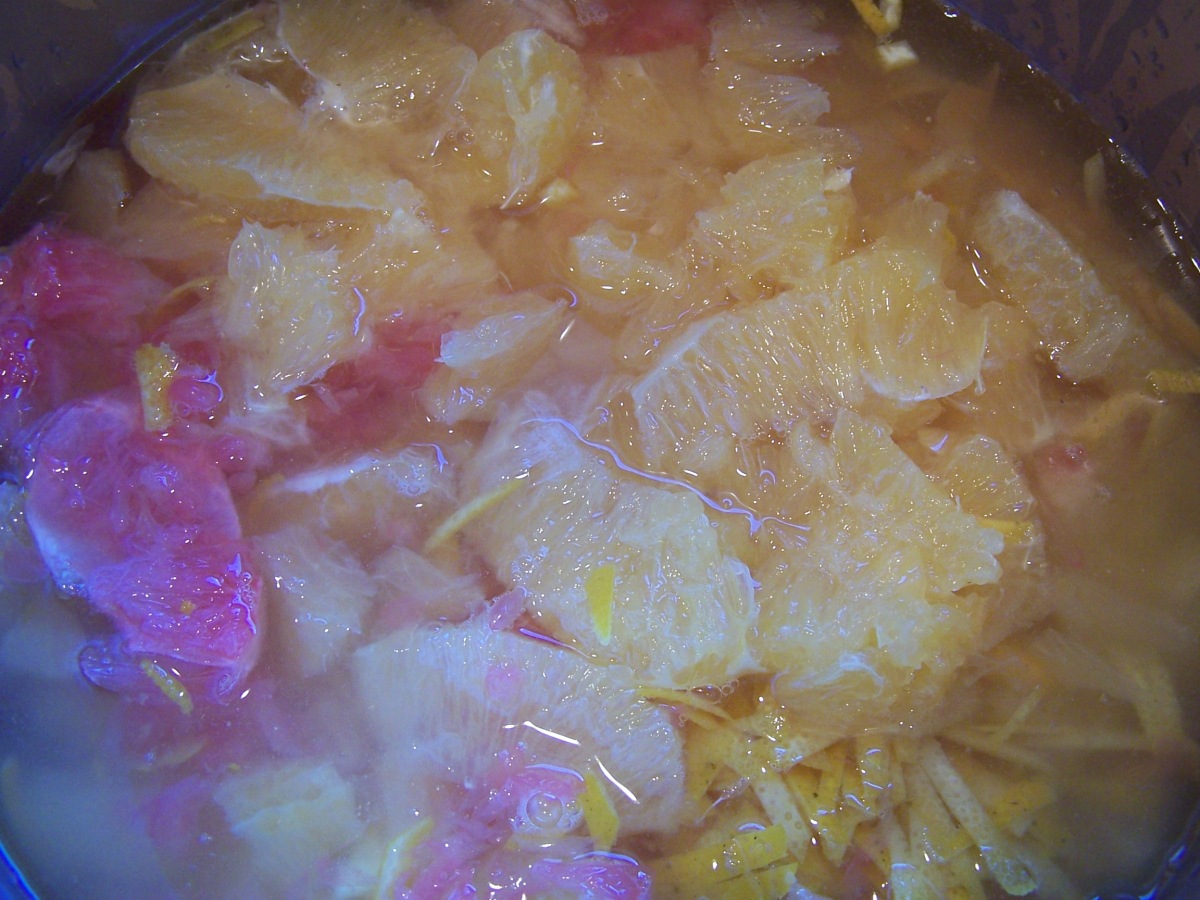 Place the fruit, juice and peel from the bowl into a 6 to 8 quart heavy bottomed, stainless steel (nonreactive) sauce or stock pot and bring to a boil. Once it comes to a boil, turn the heat down to low and let simmer for 30 to 40 minutes.

After 40 minutes, add the sugar all at once, stirring to mix in and dissolve. Bring mixture up to a boil again.

Keep boiling, stirring gently with a long handled spoon or silicone spatula, until the temperature reaches 220 degrees Fahrenheit, or until a drop of marmalade on a cold spoon congeals.

This will take anywhere from 30 minutes to an hour depending on how large your saucepan is and how rapidly you are boiling. If the temperature doesn’t seem to be consistently rising, try turning up the heat slightly. If that isn’t working, try CAREFULLY transferring your mixture to a larger saucepan.

Through the boiling process you will notice the mixture will darken in color, become more translucent and heavier as you stir.

When marmalade is ready, turn heat off and CAREFULLY spoon mixture into sterilized jars, filling to ¼ inch from the top. Top jars with sterilized lids, screwing the lid on just barely fingertip tight. Let cool for 24 hours, then store in the refrigerator for up to one month, or in the freezer for up to one year. 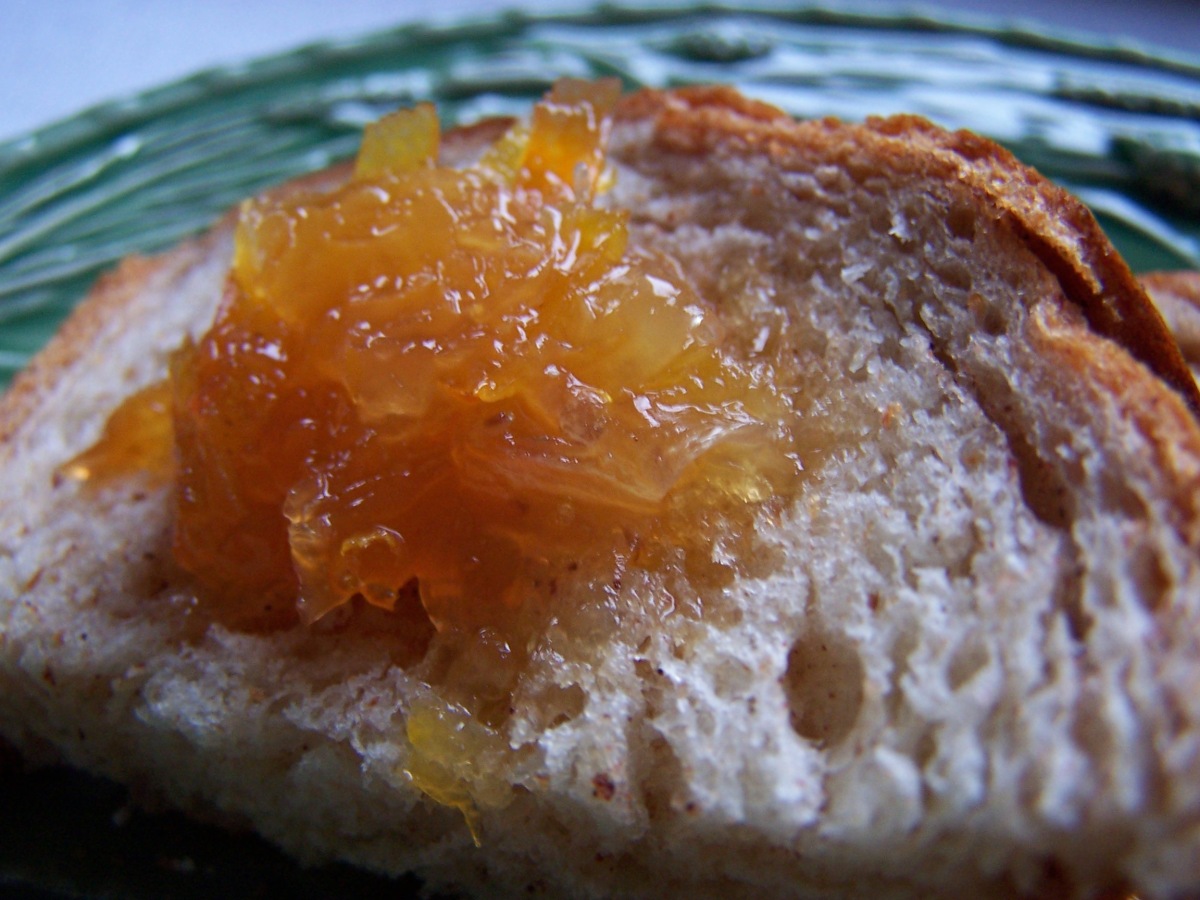 Jars and lids should be sterilized just before using, by either running them through the dishwasher, or by boiling in hot water.

See the National Center for Home Food Preservation website for information and instructions on sterilizing jars and lids:

and processing or preserving your marmalade in a canner: 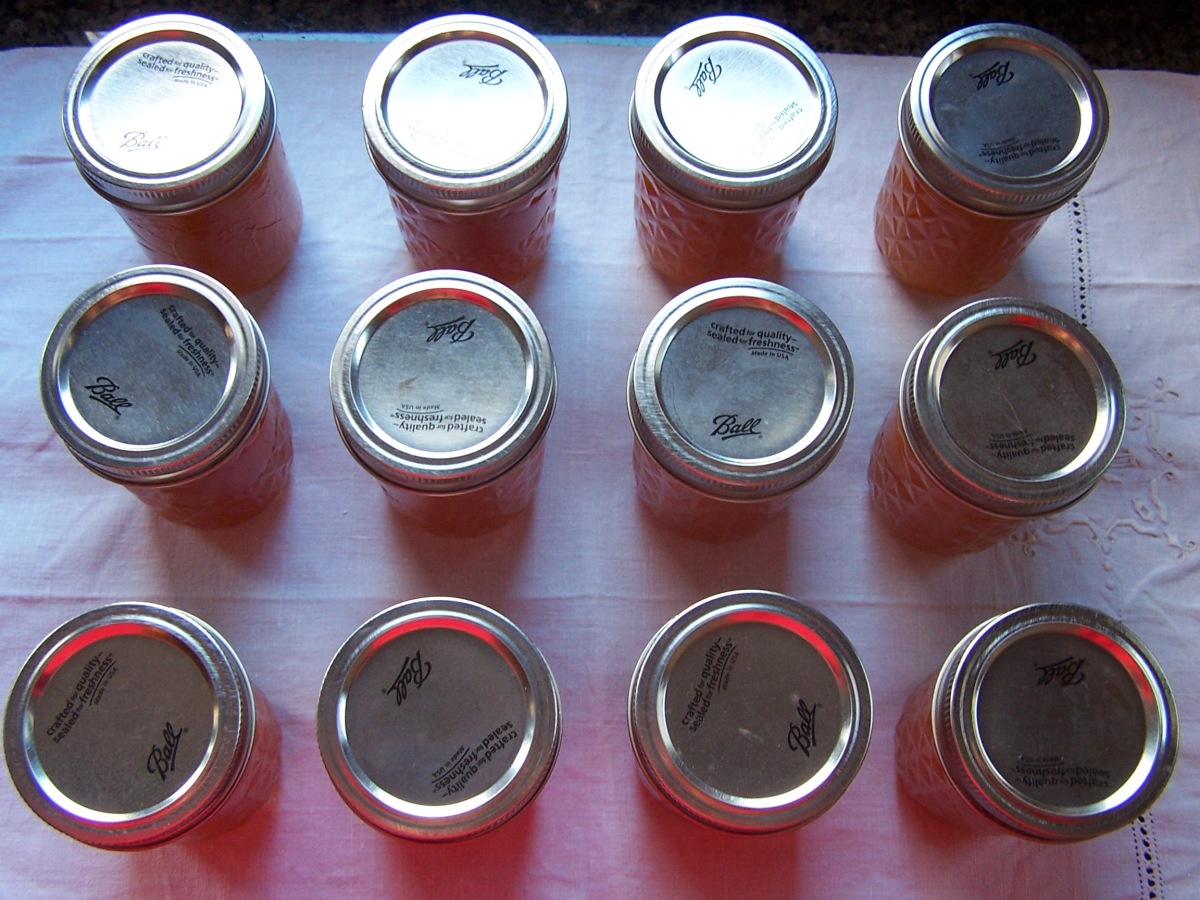 Always use only heat safe jars that were made specifically for canning food.

Give preserved food the “see and smell” test before eating or serving and “when in doubt, throw it out.” 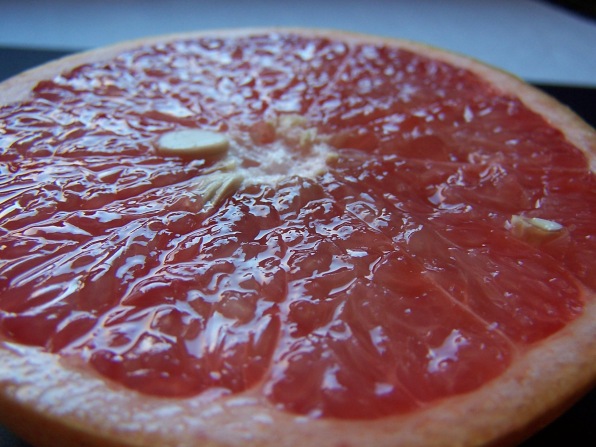