This recipe is an adapted gluten free version of Aunt Mamie’s Lightning Cake, posted here a couple of months ago: Coconut Lightning Cake with Italian Buttercream Frosting. I used my own gluten free baking mix and switched up the method a little. The result is a light, airy, cupcake perfect for any flavor combination you can think of! 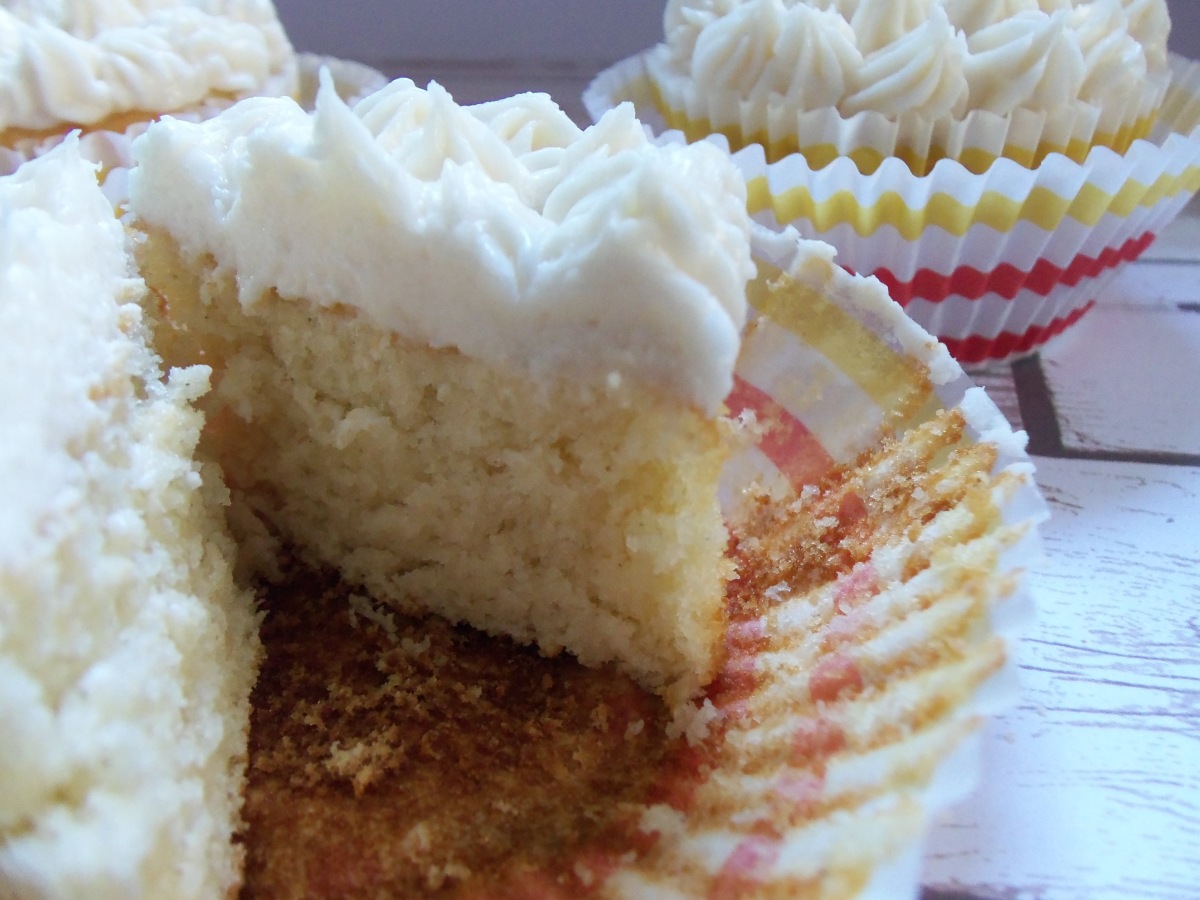 Preheat oven to 350 degrees Fahrenheit and line cupcake pan with paper liners. Sift the flours together with the salt, xanthan gum and baking powder, set aside.

Scald the milk and vanilla bean seeds by bringing almost to the boiling point and then take it off the heat. Add the butter and almond extract to the pan and set aside.

Beat the eggs on medium speed until frothy.  Add the sugar 1/4 cup at a time while continuing to beat until all sugar is dissolved. The mixture should be light yellow, heavy and fall in ribbons back into the bowl when lifted.

Immediately fill the cupcake liners 3/4 full. Bake for 10-14 minutes, watching closely to avoid over-baking. Cupcakes are done when they just barely feel dry on the tops and spring back lightly, they should just be beginning to brown.

Using a table knife or offset spatula, remove the cupcakes from the pan right away and place on a cooling rack. Let cool completely before frosting.

I frosted my cupcakes with a simple American Buttercream (1/4 cup unsalted butter, 1 1/2 to 2 cups powdered sugar, 1 teaspoon vanilla extract, 1 tablespoon half and half, and a pinch of salt beaten together).

These are so light, they would be great with just a layer of nut butter and jam or macerated fruit. Or, try the Italian Buttercream recipe I used in the Coconut Lightning Cake, linked above. I would have preferred it today, but Italian Buttercream is not fun to make on a 96 degree day! I have discovered the hard way that adding even a small amount of shortening to stabilize it impacts the flavor greatly (and not in a good way).

One recipe will make 12-16 regular cupcakes or 20-24 mini cupcakes (or one 8 inch cake pan layer). I used some fancy cupcake liners that are smaller than the regular paper liners from the grocery store and got 16 cupcakes.

*Don’t discard the skin from vanilla beans after scraping the seeds! Place them in a jar with one or two cups of granulated sugar to make vanilla sugar. How about some vanilla salt? Use salt instead of sugar and you’ll get vanilla salt for garnishing desserts and candies.

UPDATE: I made these for my daughter’s birthday and added just a teaspoon of lemon zest to both the cupcake batter and the buttercream frosting to make some delicious lemon cupcakes!