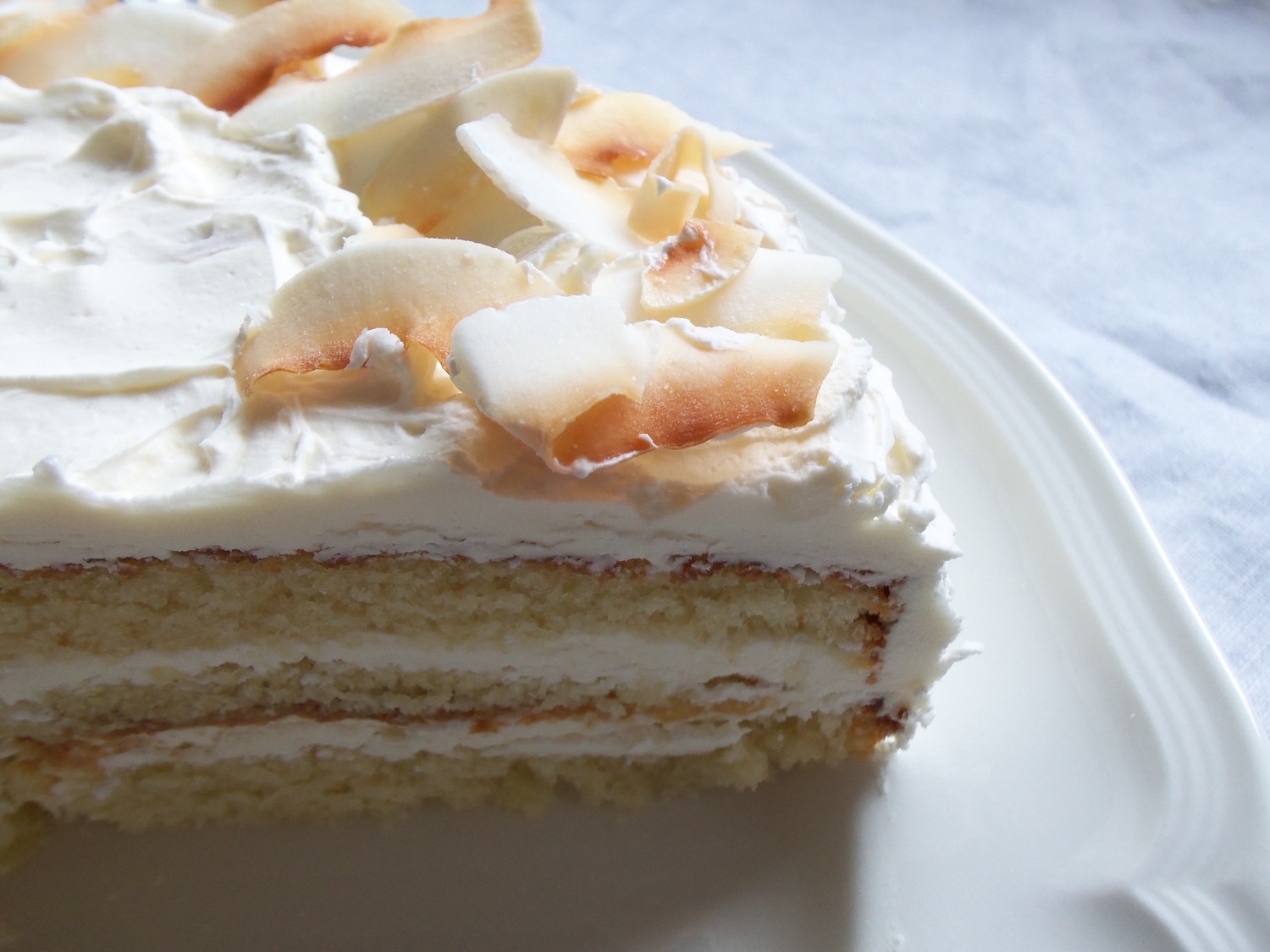 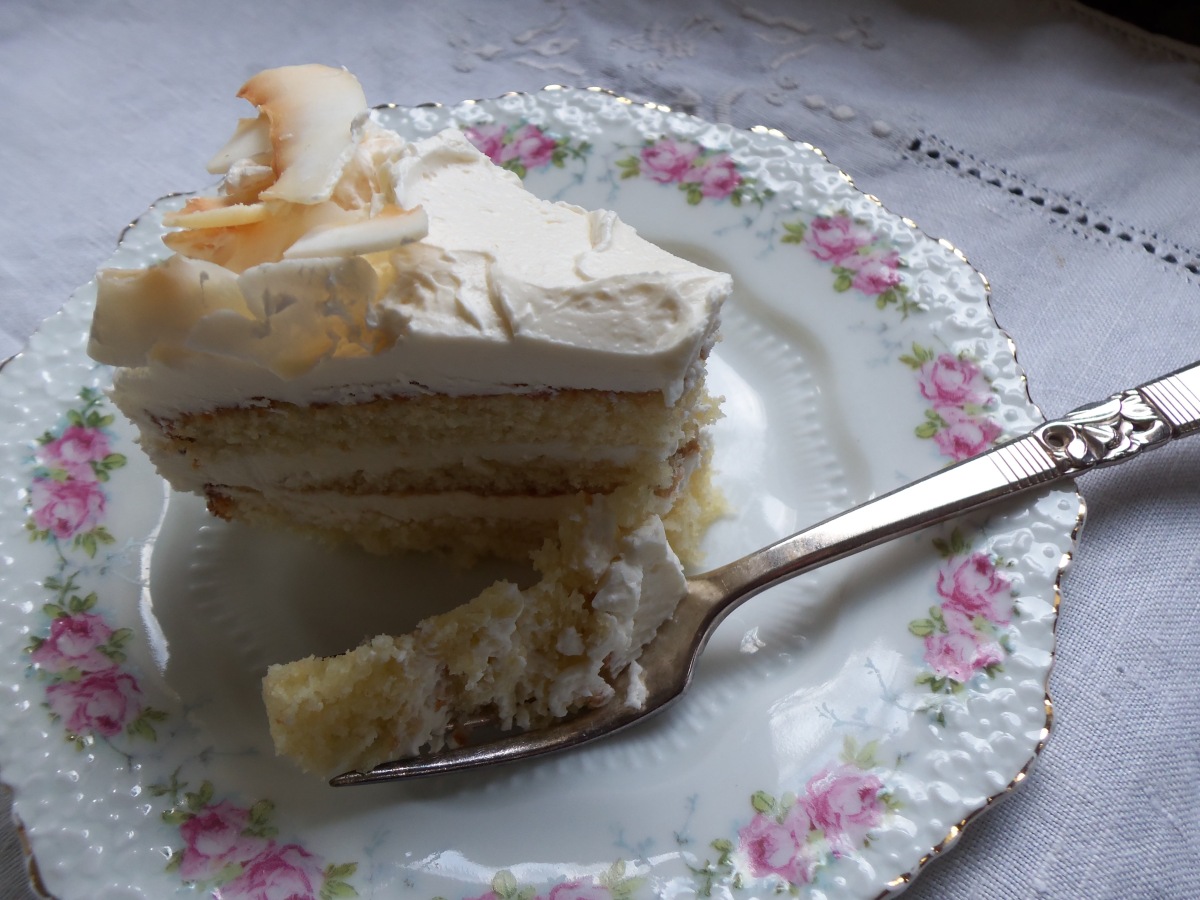 I have mentioned before that my sisters are talented bakers, especially when it comes to cake and frosting. I can usually manage a cake recipe just fine. Due to past icing disasters, I tend to have icing anxiety every time I make it.

Part of the problem is my propensity to devise shortcuts after reading recipes. Sometimes I have success, sometimes I don’t. With frosting I have realized it would be better to master a recipe first, then decide whether I want to mess with it.

Yesterday was the last official day of winter and I decided to celebrate it by making light, fluffy, billowing clouds of Italian Buttercream. While I miss snowy winters spent living in the Chicago suburbs and Syracuse, New York, I don’t miss the cold weather. I’ll take a Georgia winter and fluffy frosting as a substitute any day!

Since I knew the icing might be time consuming, I wanted a quick and easy cake. The cake recipe is an old family recipe I found in the recipe notebook my sister-in-law gave to me (the one with the brownie recipes I have blogged about). It’s called Lightning Cake and is handwritten on a recipe card with (Aunt Mamie) written next to it. Mamie was my husband’s great-grandmother’s sister. Although I never knew her, I have admiration for a home cook with a good recipe for a quick cake!

There are other similar recipes out there for versions of Lightning Cake, including one published by Fannie Farmer. This one varies slightly in fat content (due to a swap out of butter for an extra egg), and method. I had my doubts about using boiling milk in a cake recipe, but it worked! The result is a slightly dense, golden brown cake reminiscent of sponge cake. While I served it with Italian Buttercream, it would be great unfrosted with just macerated fresh fruit and powdered sugar or ice cream.

I would love to say I have lots of beautiful method pictures to post with this, but my hands and mind were occupied with the buttercream.

Italian Buttercream is a long process, but the reward of soft, creamy billowing drifts of frosting make it well worth while! 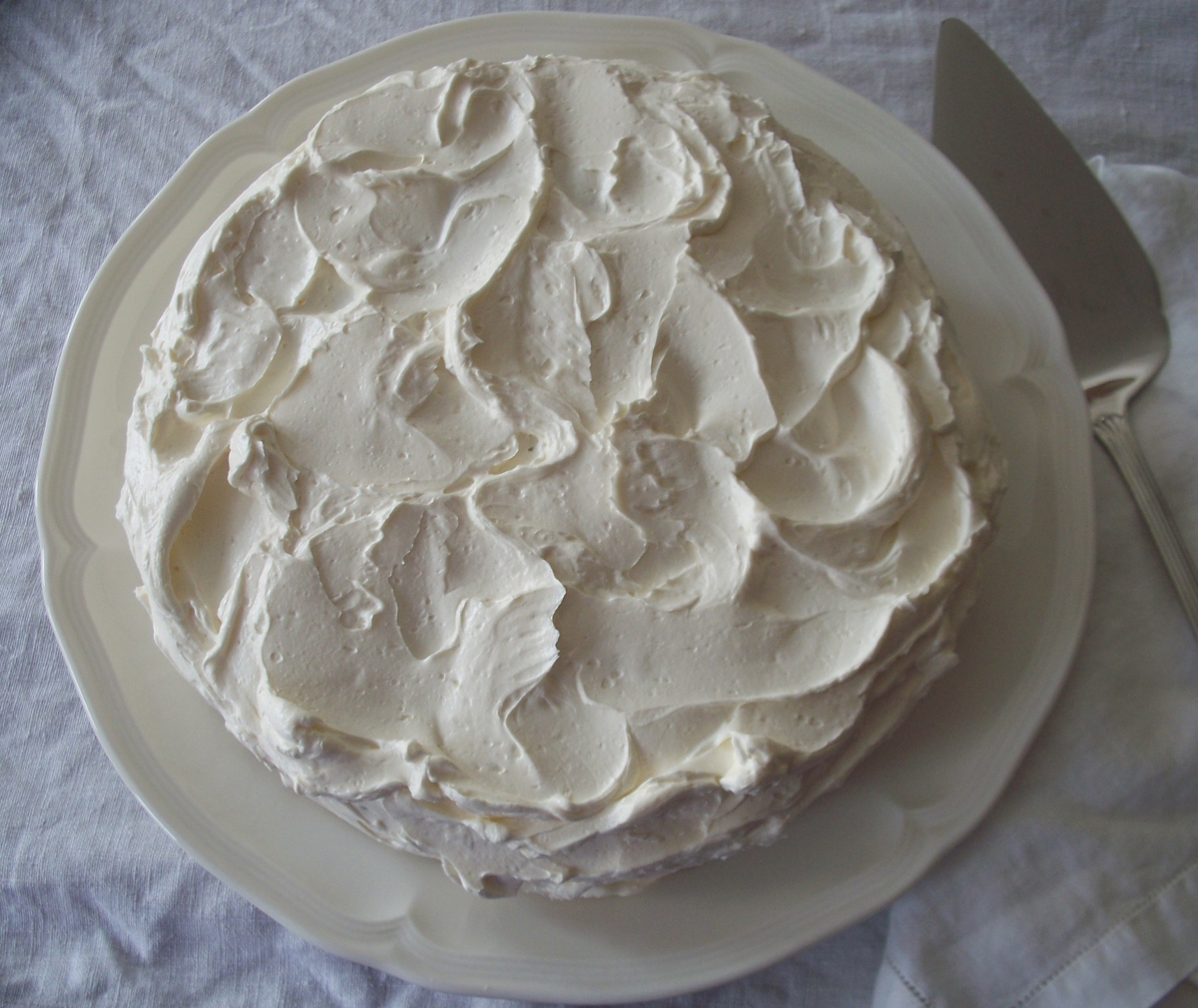 Sift the above dry ingredients together and set aside

Preheat oven to 350 degrees Fahrenheit and prepare an 8 by 8 square or 8 inch round baking pan (grease and line with parchment).

Now “beat well” 2 large eggs. I beat the eggs until foamy, then gradually added 1 cup sugar a few tablespoons at a time until the mixture fell from the whisk in ribbons and the sugar was dissolved ~ you can use a hand mixer for this.

Mix the dry ingredients into the egg mixture and fold gently just until combined.

Heat 1/2 cup milk , one tablespoon butter, one teaspoon vanilla extract and 1/2 teaspoon coconut extract in a small saucepan, just until it begins to boil. Remove from heat and stir slowly into the batter until it is fully incorporated. Batter will look a little thin.

Bake for 25 to 30 minutes, or until tester comes out clean. Let cool on a rack for 15 minutes, then carefully turn out. Remove parchment and let cool completely.

Before starting this process cut your butter into 1/2 inch pieces and let it sit out on a plate until needed. You want it softened but still cool and holding it’s shape when you go to add it to the fortified meringue base.

Pour the 1/4 cup sugar in middle of medium saucepan and pour the 2/3 cup water around it. Set it over medium heat and boil until it reaches a temperature of at least 238 degrees Fahrenheit. Don’t stir it while it is boiling. It’s best to use a candy thermometer for temperature testing.

While the sugar syrup is boiling on the stovetop, place the meringue powder, water and salt into the bowl of your mixer (fitted with the balloon whisk). Mix on medium to get the mixture frothy, then switch to high speed and add the sugar one tablespoon at a time. Keep mixing until the mixture is firm and holds a peak.

If your syrup is not ready yet, turn the mixer off. When the syrup hits the 238 degree state, turn the mixer back on low. Take the hot syrup off the stove and slowly, very carefully pour it down the inside of the bowl, keeping it off the whisk. Don’t scrape any leftovers in, you may have crystallized sugar there. Set the saucepan aside and leave the mixer going, you’ll have a glossy marshmallow fluff looking mixture.

Let the mixer keep mixing until the meringue has cooled to 80 degrees Fahrenheit (turn the mixer off to take the temperature with your candy thermometer). The cooling process takes a while. Be careful if you choose to wrap ice in towels around the outside of the mixer bowl, you’ll risk either crystals forming in your sugar or semi frozen meringue sticking to the bowl. 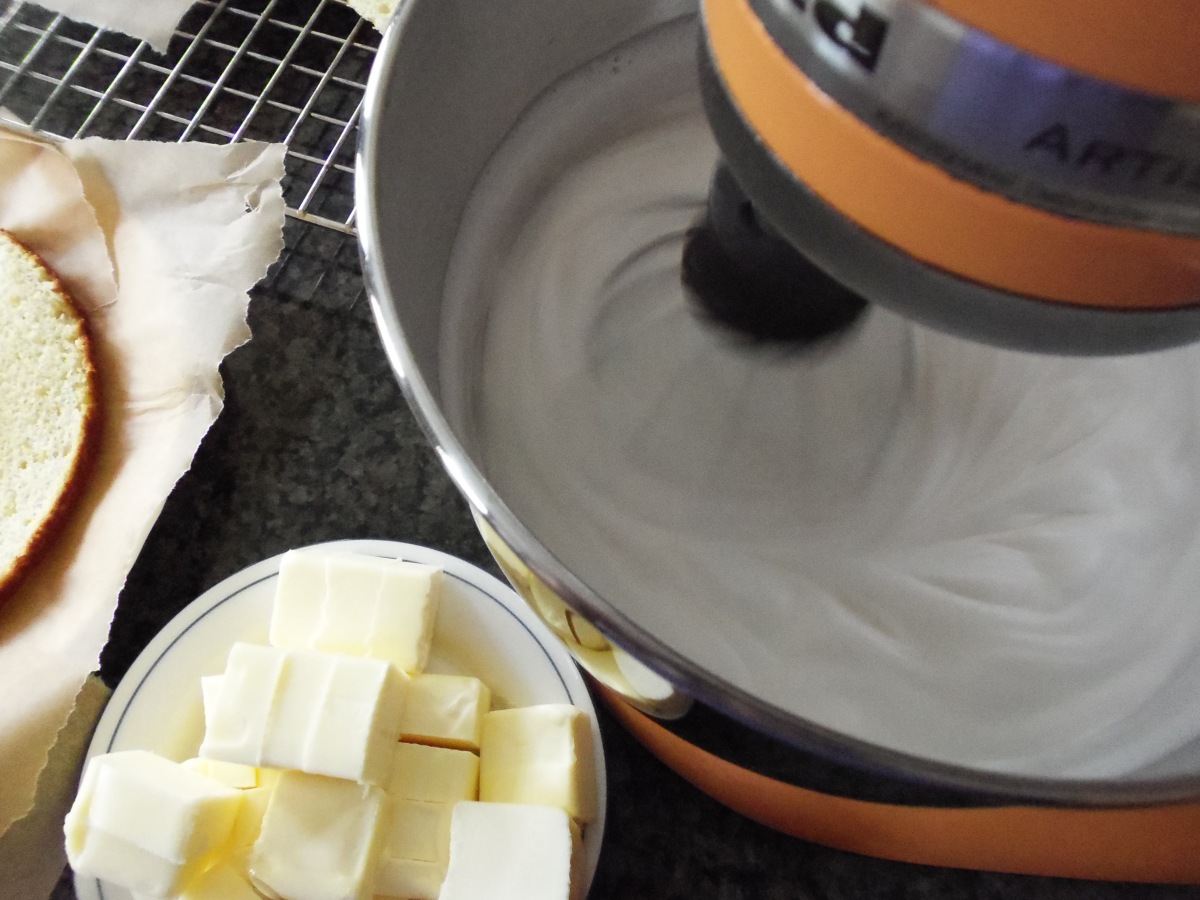 Once your meringue has cooled to 80 degrees, turn the mixer speed to medium and begin adding the soft butter 2-3 pieces at a time. Be patient with this process as well. It may look melted and yucky at first, but keep going. When you have just a few pieces left, add the vanilla extract and finish the butter. 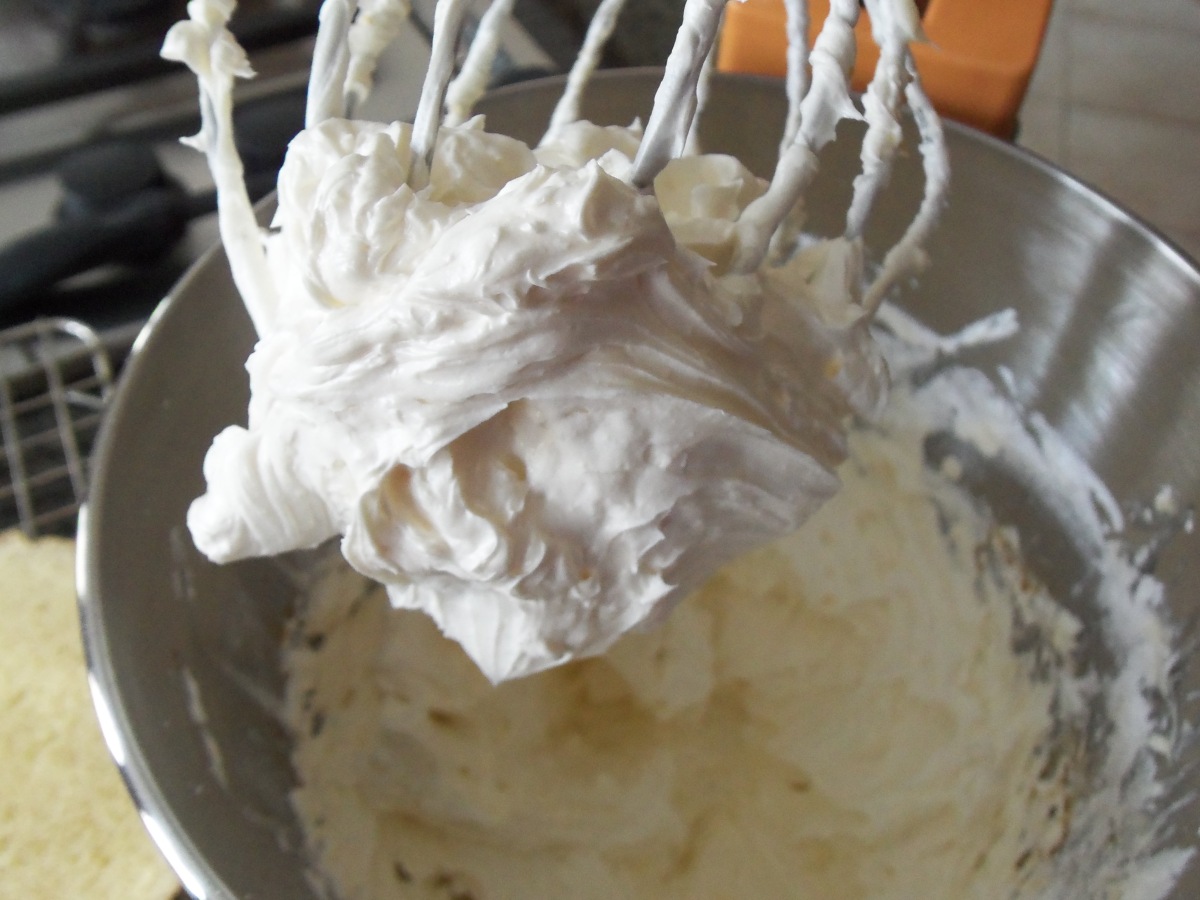 Italian buttercream can also be stored in air tight containers in the freezer for up to one month. Thaw buttercream in the refrigerator at least overnight or for a day before needing it.

Do not use acidic colors or flavorings or liquid food coloring or the buttercream may break (curdle).

By “good quality” meringue powder, I mean powder that is pure egg white. Look at the ingredients. When meringue powders contain non clumping agents or starches, it impacts the performance and flavor of the meringue (not in a good way).

Italian buttercream can be further fortified against heat and melting by adding a couple of tablespoons of vegetable shortening at the end of the butter incorporation process. Be mindful of the freshness of your shortening, you don’t want off flavors ruining your hard work. Also, don’t add more than 2 tablespoons as it will negatively impact the flavor and texture of the buttercream.

If you don’t have coconut milk powder, use coconut extract instead. Mix it in at the same time you add the vanilla extract.

I cut my cake into three layers and frosted it with my Italian buttercream, then garnished it with toasted coconut. It was as delicious as it looks! 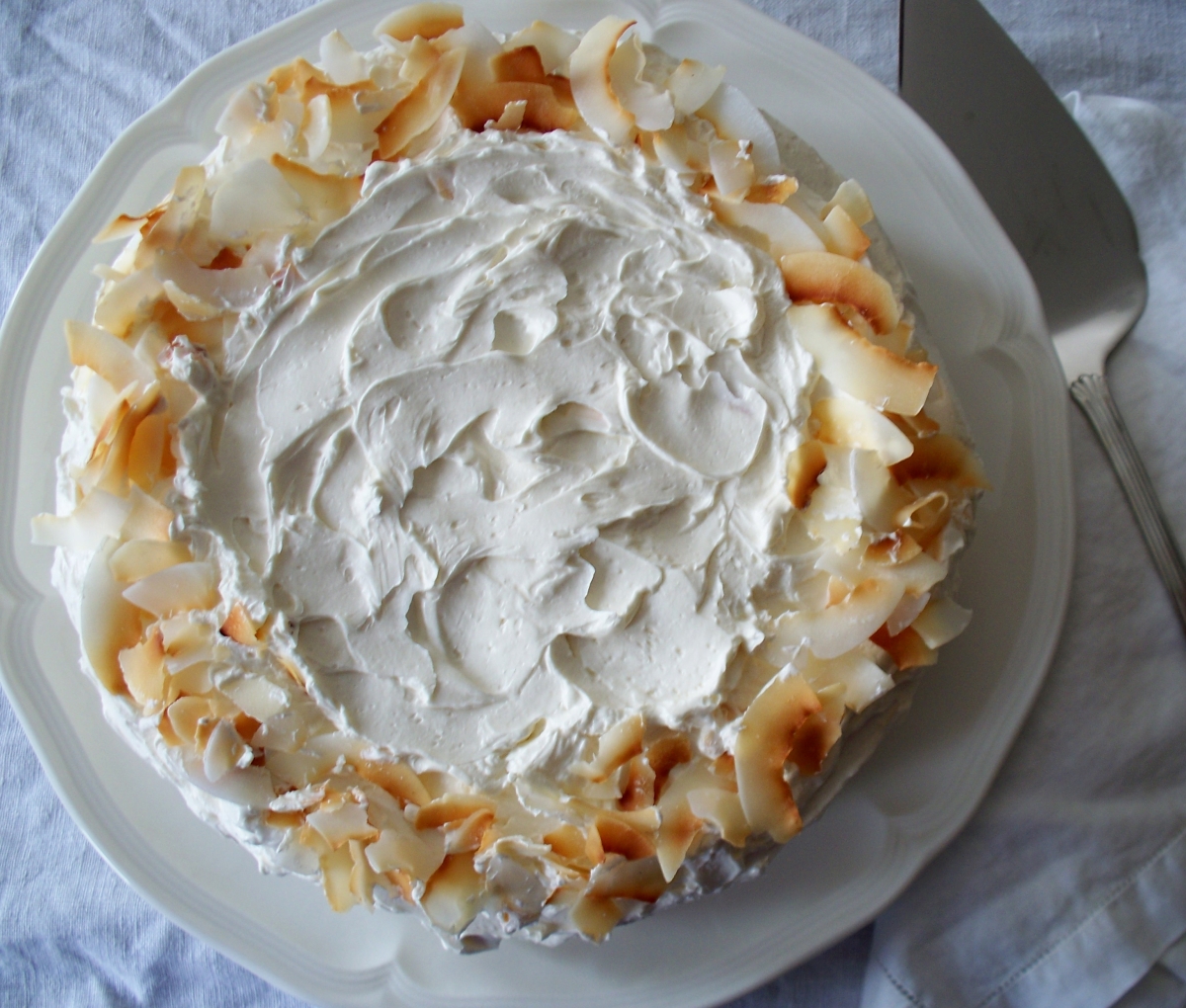